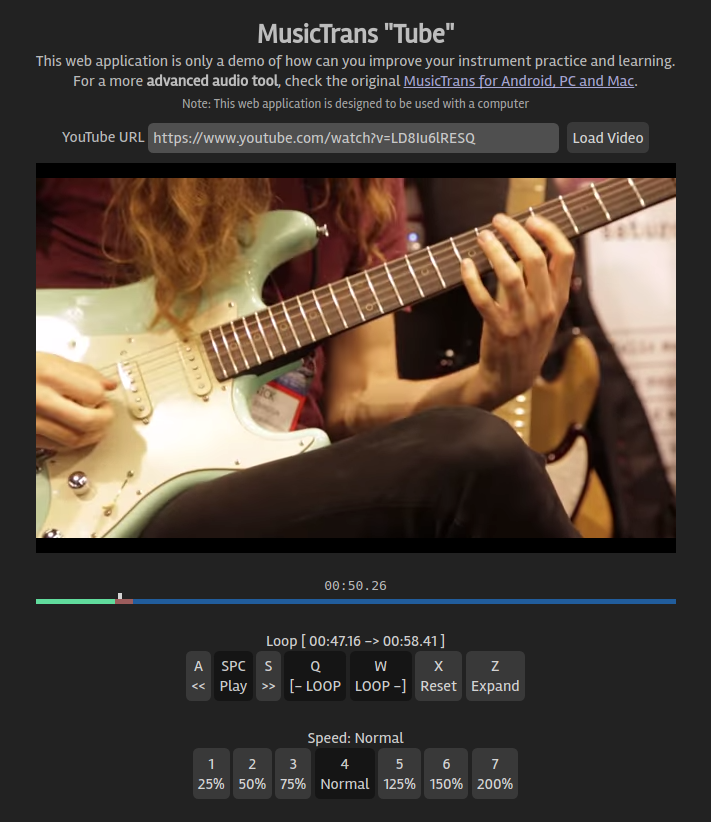 Sometime ago I was trying to not only learn the notes of some songs, I was interested in also seeing how the technique was applied on the guitar, after watching Nick Johnston playing I wanted to learn to play again, from the basics.

I started watching some videos in YouTube and then I realized that the YouTube player now includes the ability to slow the playback down, and it helped me a lot to watch more carefully some fast passages, it was like using MusicTrans but with video.

The problem is that the slow down feature of YouTube is not very easy to use when you have a guitar in one hand and you are restricted to use only a mouse. And forget about looping!! It requires  lot of precision with the pointer.

So I decided to make a simple wrapper to control the player with the keyboard, and have easy access to move back and forward, change the playing speed with one keystroke and of course, mark loop sections.  I called it MusicTrans “Tube” and it is available as tube.musictransapp.com

This is not an audio/video processing tool, because the YouTube player provides this functionality. At the same time, it will stop working if YouTube removes the functions required for this to work. If that happens, I would work on integrating video into MusicTrans.

The code is Open Source and it is available in the GitHub Repository for MusicTrans Tube.

Yes, MusicTrans price has been dropped, both Android and Desktop versions!!

As a musician I’ve enjoyed MusicTrans a lot, and I’m sure that is an amazing tool for anyone interested in playing music, so a few weeks ago I dropped the price for the Android version. I did it quietly to see what would happen, and the response has been great!

Considering that enthusiasm, from today the price for the Desktop version has been dropped too.

And there is more news! The installers for Mac OS X and Windows have been improved, and you don’t need to install Java, the installer includes everything you need to run MusicTrans.

(The Ubuntu/Debian installer don’t need that, the package system will install everything for you, only the generic Linux version will need a manual installation of Java.)

Last but not least, some people running MusicTrans for Windows had a strange bug that made it freeze when trying to open a song.  That bug has been fixed in this new version (1.0.7).

Remember that you always can contact me at fcatrin gmail dot com if you need help or want to give some feedback to improve MusicTrans. 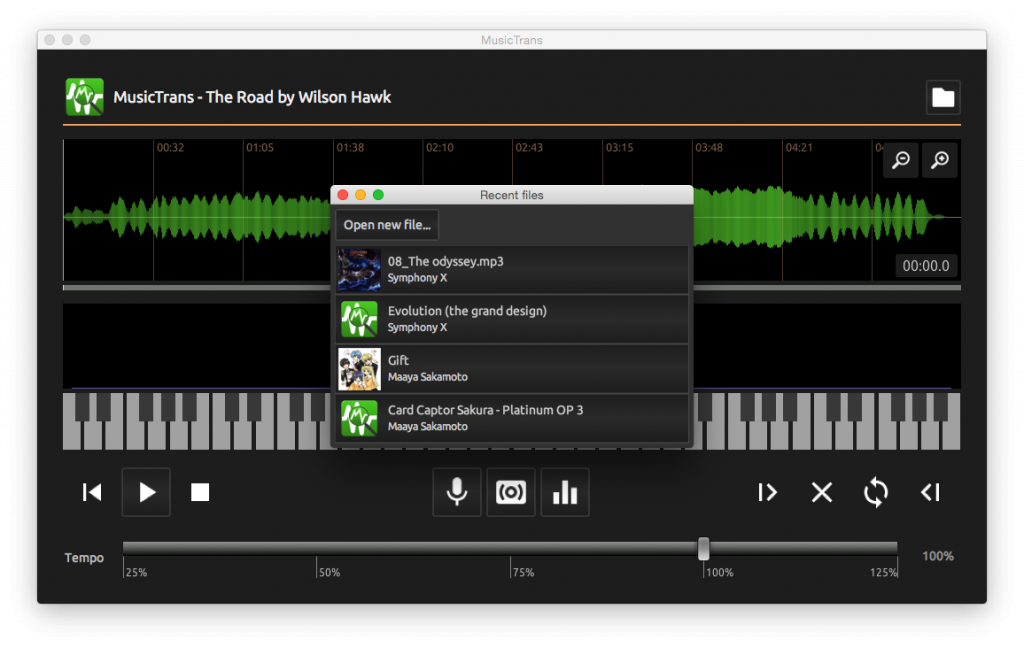 MusicTrans now has an easy way to open your most used songs. When you press the “open” icon you will see a list of recent songs, where you can choose any of them with just one click. No more need to remember where and what were your songs, even if you have deleted the original file. This feature is available ONLY for registered users.

This new version also includes a fix for some Windows users that reported a bit of flickering when using the slider controls like the tempo control or the equalizer bands. 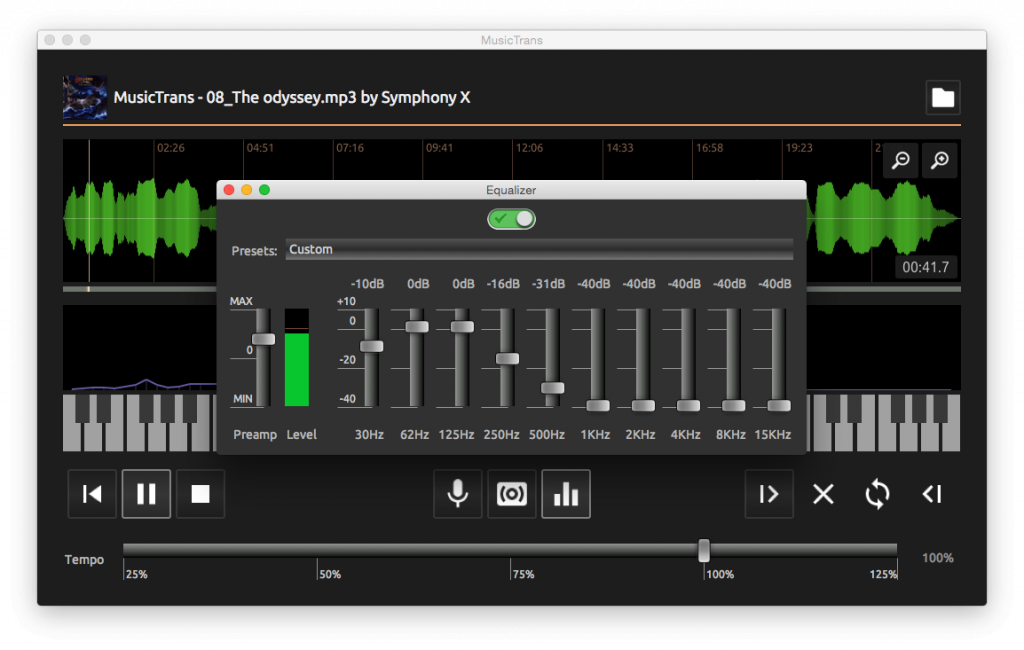 As requested from some users, finally MusicTrans has an installer for Windows Systems.

If you already have MusicTrans in your hard drive, just delete it and download the installer. It will create the icons for you, no more confusion, just click and go transcribing!

An installer has been released for Ubuntu and Debian based systems.  This installer makes easier to enjoy MusicTrans on these Linux distributions, adding a nice icon to use with your favorite launcher, and a convenient shortcut menu to open any MP3 file with MusicTrans from your desktop.

And there is more! Because now that MusicTrans is a packaged application, your favorite Linux distribution will take care of installing the required Java Virtual Machine for you.

Of course MusicTrans for Linux will continue to be available as a .tar.gz file to be used on any Linux distribution. 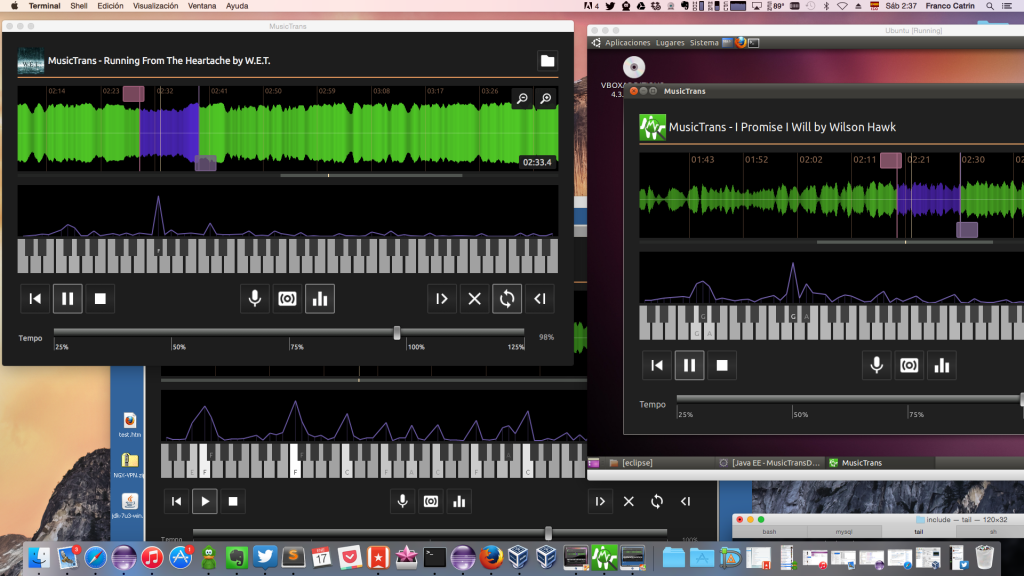 If you tried the MusicTrans demo and it crashed at launch this is important news for you.

With the help from some users, we found that the memory allocated by MusicTrans at launch was too much for many devices (1GB of RAM). A new version that fixes this problem has been released a few minutes ago, so if MusicTrans just crashed on your device this new version may fix that.

We also fixed a problem with the license checking routine.  At first launch the license was handled as expected, but once the license data was saved to avoid excessive network traffic, the license check failed.  So some valid users were restricted to 2 minutes of use, like if they were using the demo version. This is also been fixed now.

The processors found on most Android devices are very limited in power in comparison with the processors found in desktop machines.  The digital signal processing code in MusicTrans is very intensive, and it has been heavily optimized to run on this small processors.  One of the techniques used to run this code faster is to pre-calculate as much data as possible, but this technique has the drawback of requiring more memory to store the results of this calculation.

In the previous version (the one that most people have tried), the size of the pre-calculated data was “a little” relaxed, and unexpectedly they added up to 1GB of RAM.  This situation was undetected on my test devices but some users reported the crash, and looking at the code traces I found that Android couldn’t load the digital signal processing code because of the amount of RAM required.

I dropped some pre-calculated data on any code path where it didn’t made a major change, and then I ran some test to see exactly how much data where required to hold some parts where the real limits weren’t clear enough.

After those changes, MusicTrans memory use dropped from 1GB to about 40MB of RAM with just a minor performance impact, so it shouldn’t crash on any devices because of memory use now.

BTW: Did you notice that the APK is only 700KB?  Think that there are simple apps like “flashlights” with APK of 6MB or more!!